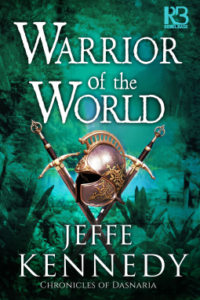 Jeffe Kennedy’s third book in the Chronicles of Dasnaria series is a magnificent addition to the series. This book finds Jenna/Ivariel recovering from her battle to free herself from her abusive husband. If you haven’t read Exile of the Seas (reviewed here) the second book in this series, you are missing out on one of the best revenge fight scenes ever written.

What I loved about Warrior of the World: world building so rich I got lost in it; elephants, yes, freaking battle elephants; the way Jenna/Ivariel finally embraced her inner strength and responded to the challenge of war by taking advantage of the negotiating skills she learned as a princess, and her deadly fighting skills ultimately embracing her destiny and calling. I was particularly impressed with the skillful way Jeffe addressed Jenna’s past sexual abuse, writing with the sensitivity and respect that such a fraught storyline deserves.

This book would work as a stand-alone but will be a richer reading experience if it is read as the third book in the series.

Jeffe Kennedy has once again crafted a beautiful, evocative narrative with solid character ARCs, and best of all, an epilogue that weaves this collection of novels into the Twelve Kingdoms/ Uncharted Realms series. As a fan of both series, I can’t wait to see how this will tie into The Twelve Kingdoms/ The Uncharted Realms series, because, let’s be real, Battle Elephants!

Brenda Murphy writes short fiction and novels. She loves tattoos and sideshows and yes, those are her monkeys.  When she is not loitering at her local tea shop and writing, she wrangles two kids, one dog, and an unrepentant parrot.  She reviews books, blogs about life as a writer with ADHD and publishes photographs on her blog Writing While Distracted. You can find her on Facebook by clicking here. Sign up for my email list at www.brendalmurphy.com