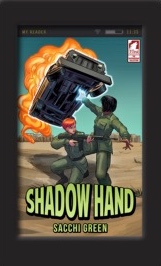 Sacchi Green’s Shadow Hand is a fast read and hits all of the high points you would expect from a Super Shero story. Well-paced, with excellent character ARC’s Shadow Hand had me turning pages and I stayed up past my bedtime to finish it. Green’s descriptive powers are on display in this book, her settings were vivid and detailed.

Pay attention to this next part: THIS IS NOT A ROMANCE, but it has romantic elements and the relationship between the lead characters is steamy.  The progression of Ash and Cleo’s relationship is an integral part of the story. From their first scene together the dynamic between Ash and Cleo, and their adventures as Ash learns to control her powers,  and find a way to use them for good are intriguing. As a fan of comic books and super Sheroes, I love the way Sacchi captured that feeling in this novel. Sacchi managed to give us a great story, and two engaging lead characters, as well as some well-developed fascinating secondary characters that, I hope, get their own story one day.  I would love to read more about Major Margaret McAllister and the rest crew of women that join together and become part of Ash and Cleo’s network for good.

This book deals with the subject of human trafficking and past abuse in a sensitive way, and I admired the way Green dealt with the complex issues surrounding it.  I would advise caution if you are triggered by the threat of sexual assault or discussion of abuse.

I’ve been a fan of Sacchi Green’s short fiction and this is her first novel but I am hoping it will not be her last. We need more Sheros in our lives and Sacchi has given us two wonderful additions with Ash and Cleo.